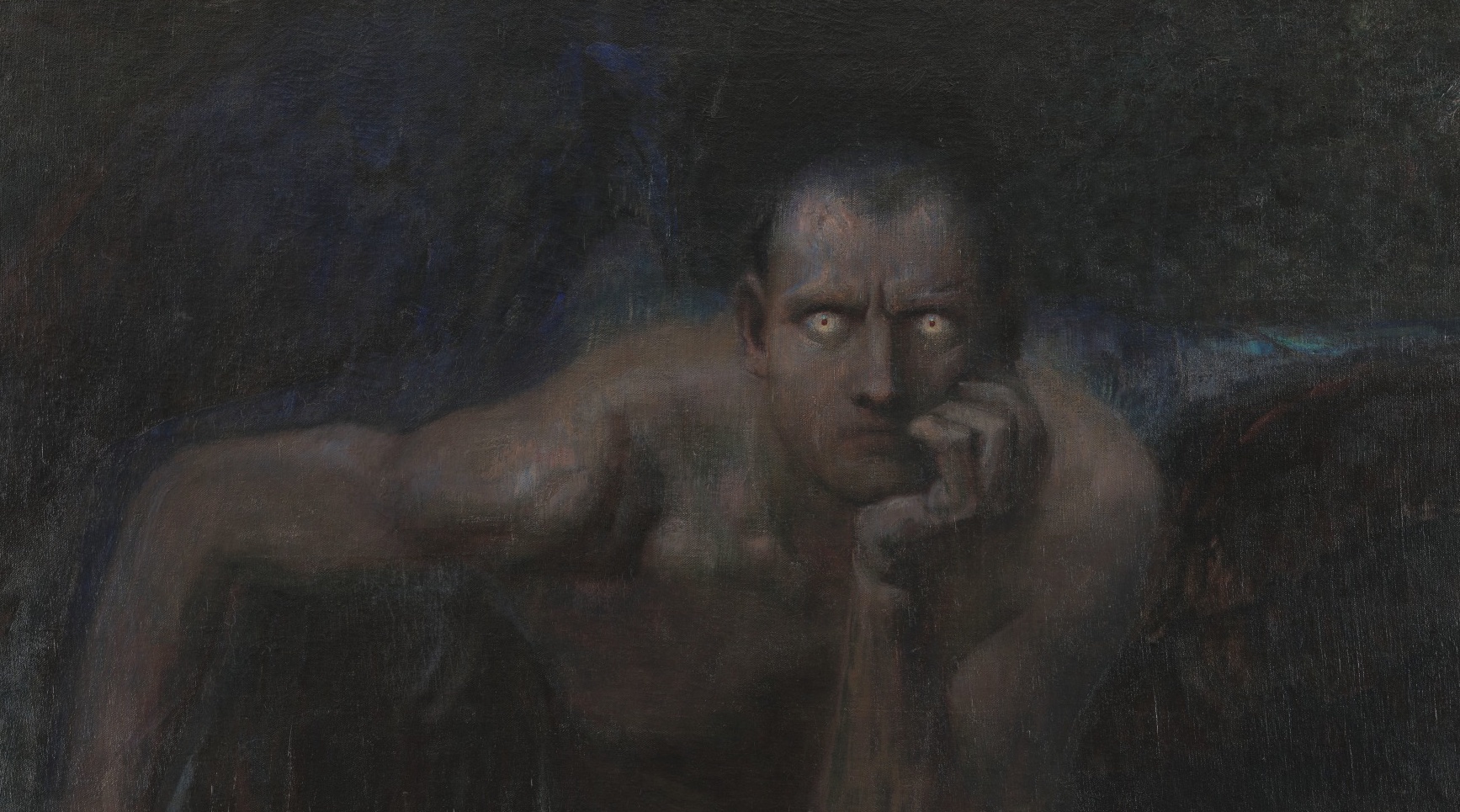 These two angels have more in common with humans in Paradise Lost than anyone would like to admit. John Milton writes cosmic characters and infuses them with humanity, but the key to understanding Satan and Raphael is to accept that they are not human.

The angels in Paradise Lost are divine slaves. Don’t make the mistake of thinking of them as simple characters, even though Satan is the first sympathetic villain of English literature! We are talking about angels here, the rules by which we analyze human characters of our contemporary and modern novels are simply not good enough.

Satan does as angels do, he sees as angels see, he moves as angels move. Satan may be near omnipotent, second only to the big G upstairs, but he still struggles with decisions. Readers like you and me see ourselves in Satan (as weird as that sounds) and very often we declare him the hero of the poem! I mean just listen to this: (or read this aloud if there’s no one around)

Milton’s angels are not human characters

Just imagine… to defy the Omnipotent! As a character Satan feels; he is a conscious being who feels the pull of gravity, he feels the heat of the sun when he flies across the endless void of space, he feels jealous of The Son of God and of Adam and Eve. For all intents and purposes, Satan is a very well rounded character! His feelings and his suffering are integral to the plot of “Paradise Lost.”

But (and this is a HUGE but) “to treat this angels as human characters, and to apply to them modes of character criticism associated with nineteenth-century novels, in which stories are translated into ethical guides to conduct, is to miss the interesting twist” (Raymond, 139).

When reading, remember that angels in Paradise lost; Satan and Raphael, are angels and if you read them as humanlike characters, you are erasing the gap that exists between them and us. Don’t forget that angels are ANOTHER type of being. They are not human and never will be. Satan’s actions cannot be translated to human equivalents!

Let me give you some context.

Obligatory historical context to understand the angels in Paradise Lost

In Milton’s days angels were extremely popular, but it’s not like they were in T-shirts or anything but a lot people, especially writers (religious and not religious) were just fascinated by them.

You see, the church had a tendency of just accepting “non-scriptural doctrines” into the “official canon” and to build on top of those doctrines. Which basically meant that there was a lot of “fan fiction” in the bible. Naturally, Protestants being who they were… protested to this! To put it lightly, they made sure to be taken seriously.

Protestants outright rejected the central doctrines of “Roman Catholic angelology” like; individual guardian angels, pseudo-Dyonisian hierarchies (whatever those are), the efficacy and legitimacy of prayers to and invocation of angels, the insight of angels into human souls and thoughts and the intercession (a fancy word for “intervention”) of angels and the fact that they appear in front of humans (Raymond, 141). Apparently, protestants thought that angels stopped appearing in front of humans after the Apostolic age, I mean of course, it’s just so obvious!

So yeah, nobody really agreed on what angels were or what exactly were their roles or their jobs (if they had any). Which is why for “Paradise Lost,” Milton just created his own angels with their own powers and limitations; accidentally writing a SCIENCE FICTION poem in the process. Let that sink in.

That’s why Satan and Raphael, the angels in Paradise Lost are so disturbingly human. Because John Milton finally answers the questions everybody had ignored until then like; “when were angels created, when and why did they fall, how do they know things, do they have bodies, do they make noise, how do they sense things, do they have free will, do they have individual names or names of offices, what are their purposes in creation?” (Raymond, 141).

When Milton wrote his epic poem, angels were being reexamined and rediscovered within and without the church. “Paradise Lost” explores the questions mentioned above with a logical approach (making it a science fiction poem, or at least the parts that have to do with angels).

What are angels in Paradise Lost?

Characters like the angels, Satan and Raphael, offer a “rich and dense cluster of topics” meaning that you can write any type of story that features an angel as a character and it will never be out of place. Because they are NOT human! (Raymond, 142)

“Radical writers discover angels everywhere” and if you want, you can read the angels as metaphors or rhetorical devices, like assuming that Satan is the embodiment of poor choice or something like it (Raymond, 142). 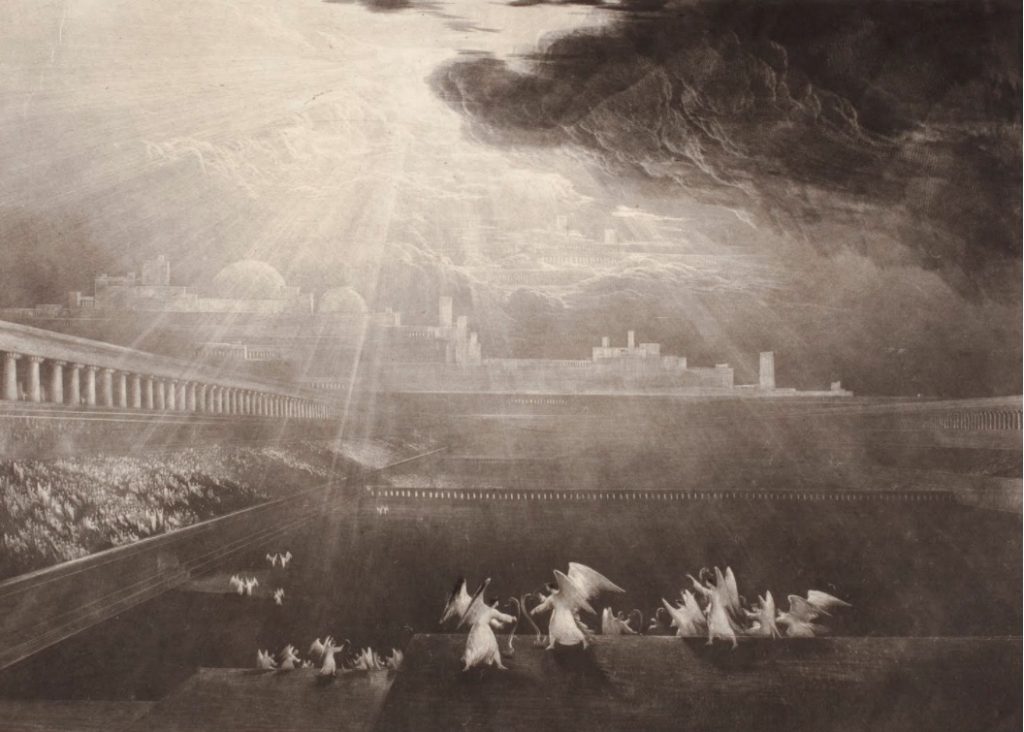 The Courts of God

As a typical writer of his time, John Milton uses his angels in Paradise Lost to explore the universe in a literal sense of the word.

Satan flies across the void of space and it takes him days to even see his destination! All in true science fiction fashion.

He also uses angels like Raphael to explore the spiritual experience of beings and to organize knowledge or to bring forth universal truths that we as humans should know.

Angels are teachers and explorers. Between Raphael and Adam there is a huge disparity both in power and in knowledge. Remember, knowledge is a big thing in Paradise Lost, after all Eve eats from the tree of forbidden knowledge!

Angels in Paradise Lost are just different from humans

Angels don’t experience love like we do, or at least like Adam does. Being in love is something that Raphael just doesn’t get. BUT, angels do have sex… and Milton spares us no detail 😉

The war in the heavens

Look, angels in Paradise Lost are just different from humans. But they also have things in common with us, or at least with Adam and Eve (who are the human actors in the story, but more on them later!). It turns out that the most important thing angels have in common with humans is that they are both characters. I mean duh obviously, but please bare with me.

Satan and Raphael and the rest of the angels in Paradise Lost exist within the poem. Basically, despite being cosmic beings, they are also characters. And characters move through space and time! They move from the beginning of the story all the way to the end.

Angels in Paradise Lost are agents of Chaos and Order

Think of angels as agents of the plot. As any character in a story, Satan and the rest of the angels move, exchange words and perform actions. As characters, their angelical interventions have consequences, but they don’t just have normal consequences. Whenever angels in Paradise Lost intervene everything changes! For better or worse and in this poem, it is usually for the worse.

Raphael and Satan are created beings, with reason and their own finite knowledge. But they are distinct from humans; they are “carefully imagined” and not just humans with wings. Whatever they do, it has repercussions, I mean Adam and Eve hear the angels singing all the way from heaven! (4.602-03)

With or without humans like Adam and Eve, for angels in Paradise Lost, the universe is a noisy place. Just imagine what it must be like to listen to the angels sing…

So if you want to make an analysis of Satan as a character or any other angels in Paradise Lost, just take into consideration that these are not normal characters. They are divine beings, created from an undefinable matter, capable of world-changing feats of strength, they are shapeshifters, invulnerable, but above all; different.

In Paradise Lost, the angels’ otherness is crucial to understanding them. Satan’s limitations are explored because his otherness is there to emphasize just how unique Adam and Eve really are in a universe inhabited by the wicked and the divine (Raymond, 148).

If you enjoyed this article about Angels in “Paradise Lost” and you are interested in more, then you might want to consider supporting me.

It’s as easy as buying one of my short stories; or, you can just share with your friends!

If you are interested in a short story and you are into “Paradise Lost” then I recommend my short story, “Worlds of Omniscience.”